Vancouver has a LOT of Asian restaurants. Few restaurants, however, can boast of a reputation built around a plate of fried garlicky chicken wings, with queues out of the door as proof!

Phnom Penh Restaurant in the old Chinatown district is a famed hole-in-the-wall that won’t be winning prizes for its décor or service . . . but it doesn’t care either.

Its secret weapon is getting the food right first and keeping it consistent. After being in business for 30 plus years, with a fan club that extends far beyond the city walls, it’s fair to say they’ve nailed it.  The out-of-towners make a point of visiting at least once before they kick the bucket.

My first attempt at trying to eat there with my friend Christine, a native born Vancouverite, ended in a walk-out. An estimated 45 minute wait in a tiny jam packed corridor wasn’t realistic considering our name was on the fifth page and it was -5c outside! Luckily for me, the second attempt was a success via an advance group booking of 10+ people. (We had no problems rounding up some locals to fill the table.)

There’s plenty to order on the menu but the cult following for the fried chicken wings is no joke. Every single table ordered at least one plate. And there are never any leftovers with this dish – even the last wing tips are fought over. Online, Vancouverites rave endlessly about the wings and many have attempted to replicate the secret recipe for crispy batter. I have to say after eating a few wings, I know why.

May be there’s some MSG involved but frankly without it, I would continue to eat a second, then a third and finally snatching the last wing tip – sorry Ben!

At $12.95 for a large plate, you get a pile of golden wings sitting on a piece of lettuce sprinkled with crispy sautéed garlic, spring onions (scallions in Canadian English), and coriander, with a slice of tomato thrown on the side for cosmetic effect. Then there’s the simple dipping sauce of lime (or lemon) with salt and pepper – a common condiment in Vietnamese/Cambodian cuisine. Every bite is greeted with a crispy crunchy sensation followed by well seasoned chicken.

After consuming the second wing, I detected seasoning of sugar, salt, fish sauce, pepper and garlic. As for the batter? It is light, thin and crispy golden brown…leaving little grease on the fingers. The balanced salty sourness of the dipping sauce is just right to cut through the crispy coating, fooling you into thinking your waistline can handle another plate.

So what makes them special is the combination of light crispy batter, the fried garlic/spring onions, and the salty-limey dipping sauce which gives the wings a refreshing lift. It’s a guilty pleasure made holy with a dash of Vitamin C.

I left the restaurant satisfied and vowed to my Canadian hosts that I could successfully replicate the dish back home in my London kitchen.

And I think I did.

My recipe and the detailed instructions are set out below. It’s best to allow the wings to have at least 24 hours to fully marinate in the fridge…sure, your fridge will stink of garlic overnight, but it’s all worth it.

As for the batter…I read somewhere online that the son of the restaurant owner has a background in Japanese cuisine. Bingo! Tempura batter is involved as it’s known to be light and airy. Adding cold sparkling water increases the lightness, and adding vodka (yes, really) will prevent gluten from forming in the batter, making it less likely to absorb oil and helping it stay crisp for longer. 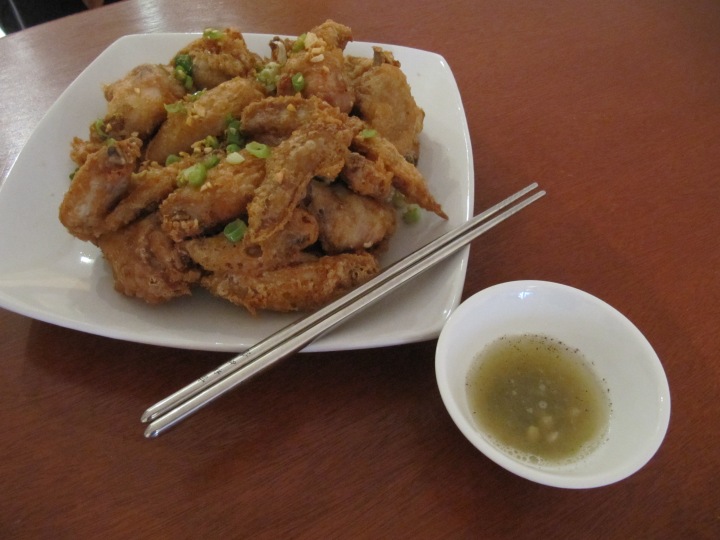 As you can see from the attached photo – my wings look pretty yummy. The photos were taken by my husband Chris, two minutes before he promptly consumed the entire plate with a couple of cold beers!!

I have to say my wings were moister than the batch of wings I ate in the restaurant. But that’s understandable. From personal experience of running a catering business, efficient, cost effective mass production in record time always takes priority. Also ensuring that every wing is thoroughly cooked is the easiest way to avoid tummy upsets and lawyers.

Anyway, it was deliciously fun recreating this cult dish. I’ll be making them again soon for my London homies.

500ml of vegetable oil for frying

Ingredient for the Batter

3 shots of cold vodka (two for the batter – one for you!)

For the sautéed garlic/spring onions

For the dipping Sauce